I am using two books for comparison as I share opinions or impressions of Aesop’s Fables.  The first is Aesop’s Favorite Fables Children’s Classic Collection, illustrated by Milo Winter and was first published in 1919.  The illustrations and moral teachings are certainly consistent with that era. The “Great War,” WW1 had just ended and the ongoing issues at the time in this country include such things as “the Prohibition,” “Red Scare,” woman’s suffrage, worker strikes, and race riots.

The second book I’m using is Aesop’s Fable, illustrated by Caldecott Honor winner, Jerry Pinkney and published in  2000. I borrowed the book from the public library because of the illustrations. Although the pictures are less in Pinkney’s book, I find them pleasing to look at for children and adults alike. The language is simple and more in accord with the way I speak. The moral of the story is presented closer to reflecting my personal view.  I find it a more positive and empowering message. I will use some of the illustrations from these books throughout the challenge.

Today I’m sharing a story I was not familiar with, but I find it amusing and certainly reflects a lesson in life that I learned long ago.

It seems a young mouse was beginning to get restless about getting out of the mouse den and seeing the world. He urged his mother to let him go out independently to explore and have an adventure.  The wise mother agreed but told him he couldn’t stay away long. She instructed that when he was out and about to pay attention so that he could tell her everything he saw.

A short while after, the young mouse came running back as quick as his little legs could carry him and shaking in terror. “ Oh, Mother! There are strange things out there! I was enjoying the pleasant walk when I came across a beautiful creature with a thick golden fur coat and bright, shining eyes. She seemed so kind and gentle as she lay quietly in the grass. When she saw me, she waved her long fluffy tail and smiled.  I would have gone over to speak to her and make her acquaintance, but out of nowhere came the most frightening beast!  He was tall and loud with red meat hanging from his chin and on his head.  The creature frantically tore at the ground with clawed feet, and when he saw me, he beat his arms hysterically at his side and shrieked ‘Cock-a-doodle-do!’  I was so frightened; I came home as fast as I could!”

“My dear son,” said the mother, “that beautiful, kind and gentle creature that you speak of is a cat. Cats would like to have young mice like you for dinner.  The terrible monster you describe is but a rooster that prefers seeds or grains and small things he finds in the grass. He would certainly not come after you. Be thankful that you escaped with your life.  Next time you when you go away, be more careful and remember, never judge others by their looks.”

How many times do we fall into that way of thinking?  If we are honest, we must admit that we all have our biases and prejudices.  I am reminded to “not judge a book by its cover.”  I try to trust my gut and give others the benefit of the doubt.  It’s a belief that is not 100% foolproof but for the most part, it has served me well. 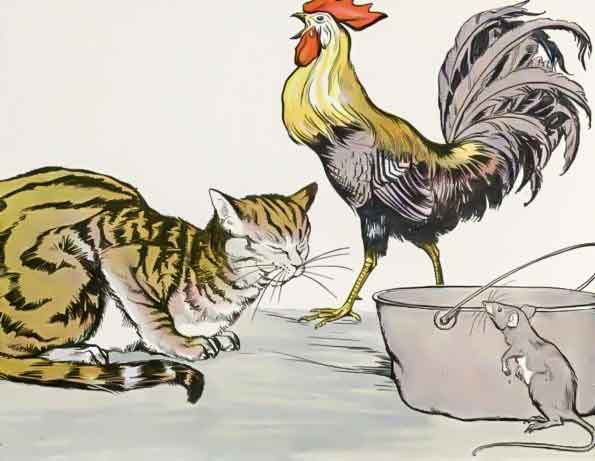 13 thoughts on “The Cat, the Rooster, and the Young Mouse from Aesop’s Fables”