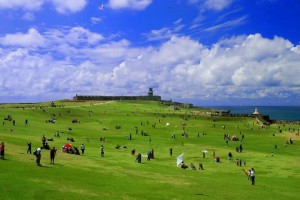 I fell in love with Old San Juan and the fort that protected it El Morro (Castillo San Felipe del Morro). It’s still picturesque and quaint, something that you would think of finding in Europe. It was old Spanish Colonial architecture painted in pastels and cobblestone streets where I imagined the Spanish senoritas walking with parasols. I was amazed at all the cultural richness that I found. Yes, I was already a nerd back then, and at the end of the trip, I wanted to twirl on the lawn of El Morro and down the streets of Old San Juan like one of the protagonists of a Roger’s and Hammerstein musical. Picture Julie Andrews as Maria VonTrapp singing “the hills are alive with the sound of music.”

A new me
When school started, I had been excited to share all this with my friends back home. My aunts had given me books and souvenirs that told our story, and I brought these things to school. My friends were not interested, not even the pictures of cute Puerto Rican pop stars made them look. They were still in seventh and eighth grade, and the world didn’t matter much beyond the cute boys in the next class.
I was hurt at first, but no one could take away what I had learned that summer. I wrote about it in my English class and had a piece published in the school yearbook. I argued with my history teacher and told him whatever he was teaching had nothing to do with me. (He was great though. He became one of my favorite teachers, and I Aced his class). In Orchestra class, I played my cello as if I was playing at the Pablo Casals Festival in San Juan.
I was glad we made that trip. I’m pleased with this assignment. Though not a typical road map, it took me on a fabulous journey. “Maps are about boundaries and perception. They are about recognizing and being recognized.” Maggie Messitt
How about you? Have you ever been “home” at a place you’ve never been before?
Day Seventeen: A Map as Your Muse #everydayinspiration

7 thoughts on “Home to where I’d never been”